Warning: Trying to access array offset on value of type bool in /home/cymthg/public_html/wp-content/themes/WSTTheme-Child/single.php on line 9
 What the World Needs Now: Reflections on a Week in Ferguson - Center for Youth Ministry Training

What the World Needs Now: Reflections on a Week in Ferguson

Dwight Johnson (above, far right, back row) and Neal Wilkinson (far left, front row), alumni of the Center for Youth Ministry Training, participated in a week-long immersion class entitled Engaging the City—Urban Theology After Ferguson: The Ferguson Fiasco, taught by Memphis Theological Seminary professor Dr. Andre Johnson (back row, fourth from left).
Classes in urban theology explore and focus on the current dynamics found in urban societies that call and challenge the church to re-examine ways of ministry. They also allow students to examine their own theological positions as they specifically relate to urban situations of poverty, addiction, racism, sexism, violence, unemployment, environmental toxicity, prison, and inadequate education. The emphasis of the class was to challenge personal theology in the ever changing waves of our society and culture.
Dwight’s and Neal’s ministry contexts are very different: Dwight serves an inner city ministry and Neal serves at a large suburban church in an affluent area. Below are their reflections on their experience in the class and the on trip to Ferguson, Missouri.
Dwight: “You’re going where?!” exclaimed an important person in my life. Somewhat critical of the direction of the conversation, I responded with, “I’m going to Ferguson for an urban theology class.” I could sense the fear and doubt in the voice of this individual as they moved to, “Are you sure you really need to go? Are you sure that this is what the Lord is leading you to do?” I paused for a moment as the words echoed in my ears and through my heart. I said, simply, “I am sure. I must go.” I have rarely felt such a strong conviction to do something, and my decision was informed contextually.
Growing up in a single parent household as an African-American male, Mike Brown didn’t seem so different. In both my upbringing and my professional contexts, I couldn’t help but feel a sense of responsibility to go deeper into what was happening in Ferguson because Ferguson continues to happen in the majority of American cities.
Neal: On the night that the Ferguson grand jury voted not to indict Officer Darren Wilson in the death of Michael Brown, I had just arrived in Missouri for Thanksgiving with my in-laws. Though our eight hour drive had been long, sleep eluded me. I was glued to my Twitter feed watching the reactions to the decision, which were so divisive and hateful. Among the most disturbing was a Tweet from a teen from the local high school that said “If you don’t like America, go back to your Ebola-infested homes in Africa.” I was confused, hurt, and despairing.
I’m a middle class, white, Northern Irish male. I grew up trusting the social and political systems in which I was embodied, and absorbed that civil obedience was the path to a successful life. I trust that the police will serve me, and I trust that by staying in school and staying out of trouble, I will find a sustainable path to the future.
This is not the case for the protestors in Ferguson. Their world is full of distrust—of the police, the justice system, and the politicians who fail to serve them. 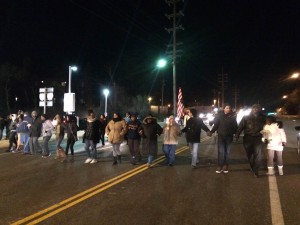 Dwight: Being in Ferguson taught me that the world is in need of the church, but not of the institution that is self-centered and unaware of the social climate around it, or whose mission statement is loaded with long words that express a desire to serve when that desire doesn’t truly exist. If we are to be disciples of Christ, we are to be a people who are no longer silent about these issues, even when silence makes us comfortable and does not disrupt our lives. Christ does not call us to be comfortable but to fight for those who are treated unfairly because of, among other things, their race or socioeconomic status.
During the class, I heard a pastor say that we have preached all the sermons we can. We have bonded for long enough with like-minded people who don’t challenge our theology. It is time to stretch our personal relationships with God in new and profound ways. It’s time to serve and act outside ourselves for the sake of those who go without and are judged by a law that doesn’t serve them. It’s time to stop talking and start doing!
Neal: What stood out to me was people’s expressions of being unheard. Their stories had not been told nor their experiences understood. In ignoring or moving on quickly from past injustices, might we perpetuate the deep pain and distrust? We are unable to conceive that the world of systems and structures that works for us does not work for another. We are unable to walk in the shoes of of the other, to experience their world, or feel their pain; therefore, they remain the “other” and “less than” because they remain at a distance.
Dwight: As a youth minister, there is a deeper revelation beyond a call to action. Our youth ministries have to resemble the church universal, and we have to be living examples of this change and charge for racial reconciliation both with our youth and in our lives outside of youth ministry. Our programming should and can be spaces for students and adults to engage in conversation about the social justice climate in our own cities. No matter the parameters of individual church polity, there is always room to consider our brothers and sisters who suffer from oppression.
As neighboring congregations, we must continuously look for ways to collaborate and work together. No matter who or where we are, we have the capacity to love our neighbor, and sometimes loving our neighbor means fighting for our neighbor. 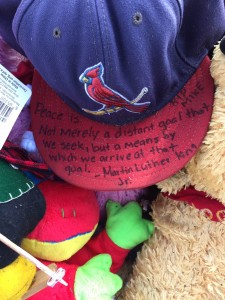 Neal: Participating in the Ferguson immersion class was an opportunity to walk in the shoes of others, to hear their stories, to see the world as they see it. We must humanize the “other” through reducing the distance, by coming into close contact with those “on the other side,” not by yelling at each other through Twitter or our TV screens but by encountering people.  As long as we remain in our comfortable social circles, humanizing the “other” will not happen. We must seek them out and pursue relationships with them.
It strikes me that the church should be a primary agent in facilitating this sort of conversation. At its earliest roots, the church was a place where status did not matter but where all found a place at the table with Christ. The early church was a subversive community that crossed social boundaries and in doing so affirmed the humanity of many.
How might we listen, experience, and feel with the “other,” and how might we restore their humanity?