Warning: Trying to access array offset on value of type bool in /home/cymthg/public_html/wp-content/themes/WSTTheme-Child/single.php on line 9
 For the Least of These: The Church Must Speak Out Against Bullying - Center for Youth Ministry Training

For the Least of These: The Church Must Speak Out Against Bullying

by Amy Jacober
I stood on a front porch with my two friends, all three of us, 12 years old. It was a Sunday afternoon and I had been at church that morning. The lesson was from Matthew 5:38-42. You know this one . . . where we teach good little girls and boys that an eye for an eye is really from the Old Testament, and in our enlightened age we embrace the new covenant—the one that says we will walk an extra mile, that we will give our coat and shirt, and that we will turn the other cheek when hit.
I wasn’t even trying to convert anyone. I wasn’t evangelizing. I simply shared what I learned that Sunday, just like I would have shared that I had pancakes for breakfast and hoped to play catch later that afternoon. The two girls with whom I played latched on to one part of that lesson and tested it . . . right then and there. One walked over and slapped me so hard across the face that I fell into the wall. When I gathered myself and stood up, they asked if I was going to hit back. I didn’t. I said I was sure they didn’t mean it.
Then came the next smack. It left a welt on my cheek and tears streaming down my face. They laughed as I cried. When I asked how they could be so mean, they told me they were teasing and that I shouldn’t be so sensitive. It was the beginnings of deep passive aggression and straight-up bullying for years to come. Only, we didn’t call it bullying then. I clung to the teachings from scripture about loving our enemies. Heck, I didn’t call them my enemies. These were my friends, I thought. In the early years they wrote mean notes on my desk and invited me into the group only to make fun of me and chase me out.
As we grew older and I wasn’t in direct contact as much, one of them in particular became more aggressive. She lied to me and about me. She spread rumors. She threatened to tell others terrible things about me. She told me that she was doing the world a favor letting them know how rotten I was and that I would only prove it if I tried to defend myself. She reminded me of that day on her porch and said if I ever tried to retaliate, God would know, and it would prove what a bad Christian I was. She said my witness would be ruined and the measure of my faith would be to see how much I could stand. I saw her pick on others. When I did try to speak up, she bullied me even more egregiously. I was fortunate. I have grown up. Honestly, there are still days when I live out of that old paradigm of who she said I was. There are, however, more days where I listen to God and realize she was wrong.

The Slow Drip of Relentless Harassment 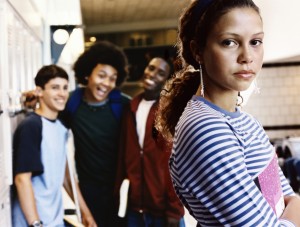 The stakes seem much higher for teens today. The bullying is more intense and more pervasive. I could change the route I walked home. I could ignore calls or throw away notes taped to my front door. Teens today don’t have that luxury. The internet changed the rules of engagement. Social media has allowed bullying to be relentless. Messages get posted, lies spread. Pictures you didn’t even know were being taken of you get Photoshopped and sent out in an instant. Even moving to another town entirely may not stop the barrage of negativity. It seems that every week there is a new story of a young person who has taken his or her own life not because they have done something horrible or hidden a deep dark secret. Rather, it is the slow drip of relentless harassment, the words and actions that never seem to stop that pervade the lives and minds of precious teens. They forget that they are not the horrible person some bully said they were. They forget how to ask for help, and are told if they do that it only proves how weak and useless they are.
Bullying is an issue in your area. I promise you, it is.

Bullying comes in three major types: verbal, social (which includes cyberbullying), and physical.[2] Verbal bullying includes teasing, name calling, and threatening to cause harm. Social bullying includes spreading rumors, embarrassing someone in public, alienating, and all forms of cyberbullying that bring about isolation and embarrassment. Physical bullying includes spitting, tripping, damaging property, and physical contact. It happens at school, on teams, in neighborhoods, in homes, and even at church.
Bullying can be difficult to pin down. It is certainly possible to read this and think every act during adolescence rings of bullying. It is also possible to assume that this is just “normal” adolescent behavior and all this talk about bullying is much ado about nothing. Both assumptions are wrong. Bullying is an act of aggression or violence, but is a specialized subcategory of violence. It is not an impulsive move. It is not a one time event. In fact, in order to be considered bullying, it must include an imbalance or perceived imbalance of power, intent to harm, and repetition. [3]

Loving Those at the Margins

As youth workers we are in the unique position of getting to speak God’s truth into the lives of the teens we know. Too often we spend time celebrating youth, rather than advocating for them. We pour time, talent, and money into children’s and youth ministries without ever wading out into deeper waters. We protect our own, as long as our own don’t stray too far from what is socially acceptable. Luther Smith, Jr. writes, “One could conclude that, as long as children behave, they are deemed worthy of Christian attention and compassion. If their behavior offends, however, they move to the margins of the churches’ concerns.” [4]
When we refuse to put distance between ourselves and those at the margin, we become part of the solution. Whether your students are being bullied, are bullies, or bystanders, ALL need to hear of the love of Christ. All also are to be imitators of Christ. And as imitators of Christ, we are to choose a third way of action: neither bullying nor being bullied. In fact, we are to seek an end to bullying.
Exodus 14:14 reads, “The Lord will fight for you while you keep silent.” I have heard this in so many abusive situations that I have lost count. Our Christian culture of “nice” misinterprets this scripture as demanding that silence be the only response to injustice. Silence is the great ally of bullying.
This is a fine line for Christians. We want to love our enemies. But this kind of silence is fear-based, not love-based. One of the most loving things that could happen would be to call out a bully for his or her bad behavior and insist upon better behavior. It would be easy if all bullies were just jerks whom we could write off. Bad apples, youth who don’t matter. The reality is that all people matter to God and consequently must matter to us.
It is not unusual to learn that the story of a bully includes being bullied by family, peers, teachers, or society. The victim becomes the offender while never ceasing to be a victim. It may be that God desires to fight for us through us, by each of us standing up for the other. According to the statistics, we (at least, 60% of us) have the opportunity EVERY SINGLE DAY to be the hands and feet of Christ speaking up for the voiceless, standing up for bullied friends and acquaintances, saying this is NOT what God intends for any of us, bully and bullied.

5 Ways to Live Out Christ’s Example

John 18:19-23 offers insight. When the high priest questioned Jesus, he did not remain silent. Neither did he wilt or respond in violence. Jesus’ response only brought on more taunting, so that in verse 22, we read, “And when Jesus had said this, one of the officers standing by gave Jesus a blow, saying ‘Is that the way you answer the high priest?’” Notice the perceived power differential? The verbal and physical harassment that follows days, weeks and months of harassment? And Jesus responds in verse 23, “If I have spoken wrongly, bear witness of the wrong things; but if rightly why do you strike me?” Jesus defends Himself and calls for the soldier to answer for himself.
While you may or may not have teens in your group who currently are being bullied, they all have known someone who has been bullied or have witnessed it first hand. There are five easy ways young people may live out the example of Christ, calling someone out and calling for accountability.

There are many venues out there to discuss bullying; three are particularly helpful places to start. Bullyingstatistics.org offers a tremendous amount of information and detail regarding the issue nation-wide. Stopbullying.gov offers resources and programs for local communities. Finally, theprotectors.org is a faith based anti-bullying organization. They offer trainings for faith based and non-faith based groups as well as resources and insight for this ongoing, ever evolving issue.
Christ calls us to care for the least of these. When it comes to bullying, we all lose. It is time for all of us in the church to speak out. It is time for us to be the hands and feet, the eyes, ears and voice of those who feel they cannot and are dying in silence.
*****
[1] http://www.businessinsider.com/staggering-facts-about-bullying-in-america-2013-10#ixzz2iap7Gj74, Accessed 23 October 2013.
[2] www.stopbyllying.gov, Accessed 23 October 2013.
[3] www.bullyingstatistics.org, Accessed 23 October 2013.
[4] Luther Smith, Jr. Children, Youth, and Spirituality in a Troubling World, ed. [Moore and Wright], p. 20. St. Louis, Missouri: Chalice Press, 2008.
[5] www.stopbullying.gov, Accessed 23 October 2013.
*****
Amy Jacober is the proud mom of two beautiful girls and one handsome son and wife of one husband. They spend loads of time as a family doing ministry together. When not at camp or on a mission trip, they can be found at home cooking and playing games. She is a professor of youth ministry, serves as a volunteer with teens and loves to write and read with the intent of being a part of kingdom work. She has most recently authored The Adolescent Journey and has two new projects in the works.