In Dyersburg, Tenn., high school football games are the place to be on Friday nights. But what happens after the game is over and kids still want to be together and have something to do?

The idea for Fifth Quarter came from community members searching for a safe place for teens to go after home football games where they could have “good, clean fun.” In the past, Fifth Quarter was hosted jointly by the Fellowship of Christian Athletes (FCA) and another church in Dyersburg. Enter Heather Kauffman, first-year CYMT graduate resident and youth director at Dyersburg FUMC. After talking with other local youth pastors and the FCA, Heather learned that a Fifth Quarter event was not planned for the first home game in August, so she and the church decided to host it at Dyersburg FUMC in their Christian Life Center, which houses their youth room and a full court gym. She found a Christian Laser Tag company in Memphis (Pure Laser Tag) who came to the event and ran the party for the night. Laser tag was the main draw to Fifth Quarter since there are no opportunities to play in Dyersburg. 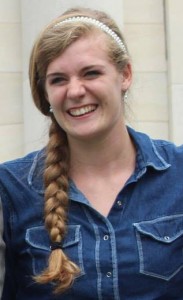 Heather advertised the event to other youth pastors in the area, in hopes that it would draw more people and help with the vision for the local churches to work together and with the FCA. “Leading up to this event, there was no telling how many students may show up. Word had spread around the schools and suddenly it seemed as though this event was going to be much bigger than anticipated. Sure enough, God provided and we had quite a night here at FUMC!” says Heather.

More than 170 students showed up to Fifth Quarter to play laser tag, Dance Dance Revolution (donated by the local YMCA), billiards, ping pong, air hockey, board games, volleyball, Gaga Ball, and Four Square. Heather says, “After the event, the story of Jesus feeding the five thousand kept popping into my head. As we set up and prepared for the event, there were some worries that we might not have enough volunteers, space for all of the students, drinks, popcorn, and even laser tag spots. Looking back, God not only provided enough of each of these things, God provided MORE than enough. Tons of volunteers showed up, the parking lot became a hot spot for the students to play games, we had extra drinks and popcorn left over, and almost everyone got the opportunity to play laser tag. God has a way of working all things together for good and providing more than we could ever imagine. What a blessing to know that we will always have all that we need…and then some!”

FCA has taken on the responsibility for all of the Fifth Quarters for the rest of the football season, but students have requested that the first Fifth Quarter event will be at FUMC every year!

Classroom: One of CYMT’s 5 Components of a Holistic Ministry Training Experience

Classroom: One of CYMT’s 5 Components of a Holistic Ministry Training Experience   CYMT values the role of theological education in the life of a youth […]

The Center for Youth Ministry Training (CYMT) recently received a $1.19MM grant from Lilly Endowment Inc., to fund the next phase of the Innovation Laboratory. The grant will enable CYMT to strengthen the Innovation Lab by building on what we learned from our original cohorts and tweaking our process and strategy for greater impact.