Presbyterian Youth Triennium (PYT) is a partnership youth conference between the Presbyterian Church (U.S.A.) and the Cumberland Presbyterian Churches and is held every three years in West Lafayette, Ind., on the campus of Purdue University. Youth ages 14 to 19, adult volunteers, and youth workers from all over the world are invited to worship and fellowship as one body of Christ. Over 5,200 youth and youth leaders attended in July of 2013. CYMT was represented with several people serving in various roles at PYT. 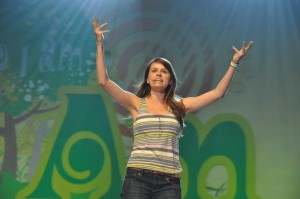 Joanna Bellis, 2013 CYMT graduate, worked on the recreation ministry team with the upfront leadership. “The role I played this year is one I can remember as a youth participant thinking it was the coolest job on the planet. Being in the Hall of Music worshiping with thousands of others and watching those who led us on stage seemed like an impossible fantasy I wouldn’t ever have the opportunity to serve in. It was a dream to be invited into this role and can say it has been my favorite role at PYT,” said Bellis.
Jill Carr, also a 2013 CYMT graduate, worked with the Community Life Team responsible for housing, meals, physical, medical, emotional, and spiritual welfare of the participants. Her team cared for the participants in the dorms, in the dining halls, and at every location on campus where events are scheduled.
Neal Wilkinson, third year graduate resident, was on the Global Partner team working to coordinate conference arrangements for the 50 international young people, help facilitate their experience, and involve them in the worship liturgy. He met young people from Hong Kong, Columbia, Pakistan, South Africa, Czech Republic, and Portugal.
Samantha Hassell, second year MA in YM student and a CYMT coach, served on the Small Group Ministry Team as the small group leader dean. Her responsibilities included caring for 200 small group leaders, helping to ensure that their spaces were appropriate, and that they had everything they needed.
Andrew Zirschky, Academic Director, was a presenter at the youth worker training track, a series of workshops equipping paid and volunteer youth workers for better youth ministry.  His presentation was “Me Making We: How Adolescents Craft Self and Community in Networked Culture, and Why the Church is Missing the Point.”
Lauren Gilliland and Joanna Simmerman, CYMT alumni, served as small group leaders.
Some highlights from the week were a Global Partner meal which Neal Wilkinson attended with the other international students. For an hour, 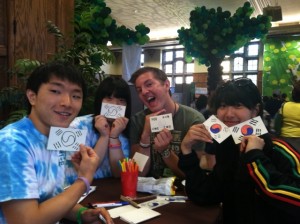 he had the privilege of celebrating a heavenly banquet, with 50 people of various race, gender, and ethnicity, all present together in the unifying name of Jesus. “There was a wonderful spirit of joy, laughter, and love in that place, and it was an almost transcendent experience to share table fellowship with our brothers and sisters. What a joy it was to be able to welcome them to be worship as part of Triennium, and to share hospitality to them,” added Wilkinson.
Jill Carr shared that her favorite part of PYT is always the diversity found in the body that gathers together. “I appreciate the diversity in ethnicity, culture, and theology. Most participants are from the United States but there are international participants as well. There is so much diversity among Americans and the international presence creates an awareness and an education for we Americans that is hard to pick up from the news alone. Being in small study groups or worship with people who live differently and think differently is a great experience for understanding humanity and the larger body of Christ. I can’t expose my small youth group to that in any other way.”
For Samantha Hassell, worship was her favorite. “I love the very first worship service when the doors are opened and young people rush in sheer excitement and anticipation. We also celebrated communion outside–thousands, on a hillside, sharing bread, as we reflected on Jesus’ feeding of the 5,000. Beautiful.” 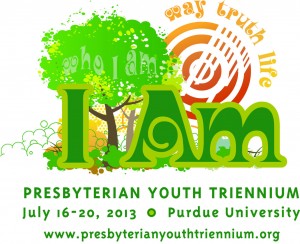 PYT 2013 brought together thousands of people from all over the world to be in fellowship with other believers and celebrate the diversity in the body of Christ. Simmerman said, “I think one of the beauties of Triennium for me was that, percentage-wise, you knew hardly anyone at the event and yet everything felt so close-knit. Somehow between small groups, worship, and everything else that was going on, they were able to create an atmosphere of connection and closeness. Somehow something magical happened that in a crowd of over 5000 people, it really felt like everyone belonged and everyone was genuinely glad that you were there that week.”