(Pictured above are first-year resident Kelly Mongoven, Christ the King Lutheran, and second-year resident Tina Boyd, Canterbury UMC, both in Birmingham.)
The original task force members who would work diligently to create the Center for Youth Ministry dreamed of a day when CYMT would have regional campuses across the country. Although we have yet to expand to another region in the country, God has continued to expand CYMT’s ministry in the mid-south. In 2009, CYMT partnered with Memphis Theological Seminary to develop a Master of Arts in Youth Ministry degree program. This partnership expanded CYMT’s ministry from Middle Tennessee to West Tennessee. 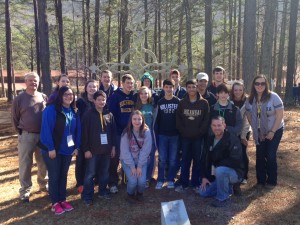 Rebecca Bibee from Epworth UMC and her youth group

In 2010, Epworth UMC in Huntsville, Ala. reached out to CYMT to see if we would consider working with a church in their area. Since CYMT already had a coach in that area who had been working with churches in southern Middle Tennessee, we followed God’s leading into the northern edge of Alabama. With the success of that partnership word began to spread and in the fall of 2012, CYMT partnered with two churches in the Birmingham area:

This past fall, CYMT renewed our partnership with Epworth UMC in Huntsville by placing a new graduate resident at their church. Two other churches joined the CYMT family by becoming partner churches:

These additions bring the total number of partner churches in northern Alabama to five and the total number of graduate residents to six. (Trinity’s youth minister and associate youth minister are both in the program.)
We hope to continue to grow our ministry in this region; two partner churches have already applied for fall 2014. We hope to grow each of our regions to the point that we are partnering with 12 churches in each region every year.
As CYMT continues to follow God’s leading, do not be surprised if we expand into northern Mississippi where we currently have two partner churches or eastern Arkansas where we have one partner church. There is no shortage of churches with a need to develop effective ministry with youth and their families.
If you know of a church that would benefit from CYMT’s graduate residency program that is within a four hour drive of Memphis, please let us know and direct them to information about our Partner Church program.