Warning: Trying to access array offset on value of type bool in /home/cymthg/public_html/wp-content/themes/WSTTheme-Child/single.php on line 9
 Book Review: Of Games and God - Center for Youth Ministry Training

Book Review: Of Games and God

Video games. Some people love them, others hate them, and there is a large group of people that is indifferent. You can find them on computers, phones, in social networking sites, on music devices and tablets; everywhere we look we can see video games. The only place we don’t see them is in the church on Sunday mornings (Praise God!), but that’s because we’re looking for controllers and hand-held devices. On any given Sunday I can find at least one person clothed in a video game-related product or conversing about a video game, and many times I can even see children playing on their parents’ phones (gasp!). No matter how you feel about video games, they are here and they are becoming increasingly more socially acceptable. Love, hate, or indifferent we need to critically think and talk about this medium of communication. 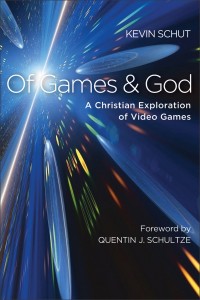 Dr. Kevin Schut is an associate professor of media studies at Trinity Western University and is the chair of the department of media and communication. He is also an avid gamer. In his book, Of Games and God: A Christian Exploration of Video Games, he does an excellent job of conveying thoughts and research from both sides of the video game discussion. He notes that this book is an introduction to the topic, which is true, but it also has very good information for those who don’t really understand video games as well as those who play them a lot. He has some very important things to say to gamers.

A quick look at the table of contents reveals some relatively hot topics especially when it comes to Christianity and video games. There is a chapter on spirituality, violence, addiction, gender roles, and even education. Each of these chapters looks at the issue, any writings or research surrounding it, and then our author gives us his opinion on how video games are being or can be redeemed. Read on to learn how this book can be helpful for the Christian parent, church leader, and gamer.

The Perspective of the Gamer Youth Minister

The first chapter does a great job of helping us understand video games as a tool of communication, a type of media. We can see where video games  fit in our culture and the history of media. This chapter also explains potential problems and potential benefits of video games, and serves as a great teaser for what’s ahead in the book.

Parents, I am a youth minister and I have heard your cries. Especially those of you who have the stereotypical teenage boy who only wants to play violent video games. My suggestion to you is that you read, at the very least, chapters 2 and 4.

Chapter 2 is perfect for the non-gamer, and for parents who have fond memories of Mario Kart and Tetris. It helps people who have never played video games to understand what gamers are thinking and why they think that way. Schut does a great job at highlighting, literally, video game vocabulary. He also helps us to understand what a video game is, what it does, and how it’s different from other media such as movies, books, radio, etc. The take-away: Video games are interactive, which makes them different from all other media. They force us to problem solve and think through the choices we make in the game.

In chapter 4, “Games and the Culture of Destruction,” Schut addresses violence in video games. He gives a brief history lesson on the topic and points out that in the last 10 years, video games as a whole have become less violent; he also notes that some games today have nothing to do with violence. We also get a quick look into “media effects” research and specifically research about the effects of video game violence on us. He addresses many tough questions that we currently ask and some we should be asking. However, if you’re looking for an answer, you won’t find one and for good reason. These questions are too big and too contextual to be answered by one person. The take-away: Violence should not be glorified, but in video games, as well as books and movies, it can be a tool to help us learn and grow and even oppose violence itself.

Church leaders, you have youth and adults playing video games. Some of them play for 35+ hours a week. (Did you know that the average American watches 35 hours of TV per week?) It would be worth your while to read chapters 3, 8, and 10.

Chapter 3, “Making the Immaterial Playable,” addresses issues that come up when we talk about religion and spirituality within the world of a game. Schut clues us in to the fact that video games are programs made of 1s and 0s (binary code), which means that they are bound by specific rules made up by the programmers. This takes out much of the mystery that we cherish about spirituality. On the other hand video games are interactive and we are often given choices that can really help us to think through our faith and/or morality. The take-away: We need to critically engage entertainment as a whole, but specifically video games because of the way they can cultivate good questions of faith and spirituality.

Chapter 10 is a short critique of a Christian ministry to gamers called “Gamechurch” followed by Schut’s own instructions on how we might go about critiquing video games in our culture. This chapter is helpful to the church leader as it allows us to see what’s already being done and offers a way to thoughtfully look at video games. The take-away: How are YOU engaging video games and video gamers in your context?

Finally, I encourage gamers to read the whole book. It will help you understand the way non-gamers think. It will help you see many pitfalls in video games that we often overlook or take for granted. It will also help you to see benefits of video games and that as a Christian gamer you’re not alone. Most importantly, Schut has given us all, gamers and non-gamers alike, tools to look critically and thoughtfully at what video games are communicating, how we interact with them, and what that means for our Christian spirituality.
*****
Mitch Toler is a May 2013 graduate of the Center for Youth Ministry Training and he is an avid gamer. He serves as the youth minister at Rehoboth United Methodist Church in Gallatin, Tenn. Mitch and his wife, Casey, live outside Nashville.